St Ann’s Hill is a wooded public park and nature reserve on a gravel-capped knoll overlooking the Thames Valley. It’s very popular with dog walkers – most people you meet will be accompanied by at least one canine friend!

The shade is provided by a variety of trees: chestnut, sycamore, laurel, larch, oak, sequoia, horse chestnut, scots pine and beech, as well as holly. The earthworks of a hill fort from the Iron Age are visible on the top of the hill and there have been finds of material from the early Bronze Age through to Roman times, suggesting the enclosure was used over a long period of time. 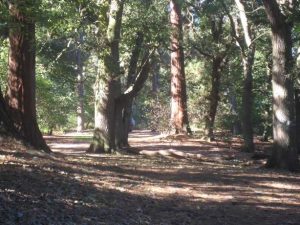 A nature walk of about three-quarters of a mile (1 km) is described in Runnymede Borough Council’s leaflet ((click here to download), but this includes steep slopes and steps, so is no good for a “walk with wheels”!

However, people in wheelchairs and babies buggies can be pushed up a gentle sloped path from the car park at the eastern side of the hill, leading to a broad path which circuits the hilltop. Enter through the gap next to the gates (the nature walk ascends steps to your left) and keep ahead: the initial slope may be hard going for someone pushing a wheelchair, but is well worth the effort.

The beacon on St Anne’s Hill

When the path levels, press ahead and you encounter two viewpoints in turn through breaks in the trees. The first has a paved area next to a beacon, first lit as part of the “Fire over England” event in 1988. The view is over St Anne’s Lake, Thorpe Park and Heathrow Airport, where you can see planes taking off and landing. The second viewpoint looks over Lyne towards Bagshot – the radio mast on Bagshot Heath, nearly nine miles away, was clearly visible when we visited. You can enjoy the view without descending a slope to the paved area provided. This is via steps, so inaccessible to those with wheels. 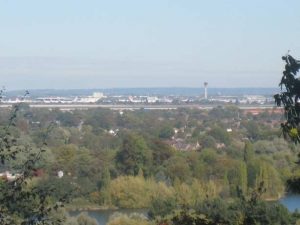 Continuing the along the hilltop circuit, the path ahead narrows and descends. Wheelchairs and baby buggies should turn left here (by a seat) to cross the crest of the hill. You will soon reach the path you used on your ascent. It’s easier going downhill and you’ll reach the car park very shortly!

The site is well wooded, but there’s a flat open area (“The Dingle”), popular for picnics.