Royer aims to cheer up nation with reggae song

A song written by reggae music fan Royer Slater as a schoolboy has been released for the first time after 41 years.

Royer hopes “We Want the Reggae” will be a cheer-up call during these dismal times. 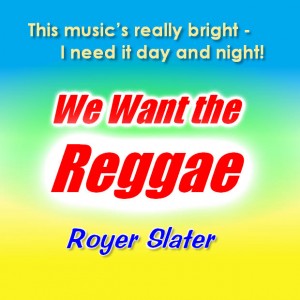 Peterborough.  He recalls, “Reggae was a breath of fresh air at the time: its infectious rhythms made you want to move, while its bright melodies and simple lyrics made you want to sing along.  ‘We Want the Reggae’ encapsulates those records: it’s quite simply ‘fun’ music – a happy, sing-along song with a great rhythm and no pretensions.”

The track is available for download at several music sites including iTunes, Amazon and Tesco Entertainment.

“I didn’t do anything with the song at the time because I was studying for A-levels and then popular music tastes quickly changed. I recorded songs I’d written in my bedroom on a reel-to-reel tape recorder, using a very basic multi-tracking system. Lots of kids do that now on their computers, but in those days it was unusual. It was very ‘hit or miss’ as I couldn’t go back if I made any mistakes.

Several years later Royer took the opportunity to re-record of ‘We Want the Reggae” but still didn’t think the time was right. “Then when I played it a few months ago I was surprised how fresh it sounds: it’s catchy, it makes you want to move with the rhythm and it’s lots of fun – just what we all need to cheer us up!”

Royer had two wake-up calls that prompted him to blow the dust off his music: his mobility was affected by a rare spinal condition called transverse myelitus, then he was diagnosed with prostate cancer.  “There’s nothing like health scares to bring home to you how important it is to act now while you still can,” he says.

Royer’s working life hasn’t been in music but in press relations and writing for magazines – primarily the trade and technical press – although a record label he co-founded during the 1970s had moderate success. “My few recordings as an artist were unsuccessful. In the past 25 years my only music-making has been singing and playing guitar as a worship leader in a Woking church.”

Extracts of the song can be previewed on iTunes, Amazon and Tesco Entertainment.

The whole track can be heard on YouTube here: http://bit.ly/iCaCWF

This entry was posted in Musical matters. Bookmark the permalink.