I’d written at least a couple of dozen articles for the trade and business press about the benefits of wireless heating controls, as well as several about a new energy saving control technology called TPI. So I decided to experience the benefits first-hand in my own home, by replacing our old mechanical heating controls with wireless TPI controls .

As expected, they made our home more comfortable.  I’m sure they also saved energy compared with the old low-tech mechanical thermostat and timer, but it wasn’t possible to quantify the savings because we had had cavity wall insulation installed the previous summer.

The new controls are very easy to use. And, they’re wireless, so were easy and quick to install.  We have a gas boiler which provides room heating through radiators and heats our hot water, stored in a cylinder.  Everything I needed to upgrade the controls was included in a Sundial RF² wireless control pack made by Honeywell.  They provide three pack types to match the needs of different heating systems.  I used Sundial RF² pack 2 which contains a wireless enabled timer, a digital room thermostat and wall mounting plates for both 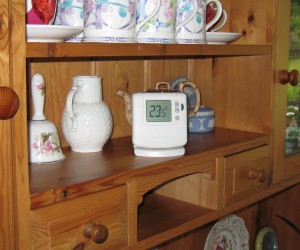 We keep the wireless thermostat on a wall unit. This photo was taken during summer, when the heating was off: it shows the room temperature is 23.5C. It would not control the heating system to provide such a high temperature.

units. There was also a tabletop stand for the thermostat which we decided to use instead of the wall plate.  That means we can place it on a shelf, which I determined was the best place to sense the room temperature, being well away from the radiators and doors.

The thermostat has a large digital display which enables us to see the room temperature clearly from anywhere in our lounge/dining area.  We can view and change the set temperature with a couple of button pushes. And a flame symbol in the display shows when the thermostat is asking for heat, so the boiler is firing.

Wireless link
The thermostat connects via a wireless link with the new timer, which I fitted in place of the original timer, in the kitchen next to the boiler.  Honeywell says where the original timer uses an “industry standard” base plate, the new timer simply slots in place of the original, without any need to drill screw holes or touch the wiring.  Our original timer was a 1970s design and used an older type of base plate. So after switching off the main supply to the central heating system (a switch next to the boiler), I first unclipped the old timer to reveal its base plate containing the wiring terminals, marked each wire with the terminal it went to, then unscrewed the wires and the screws holding the original plate to the wall. 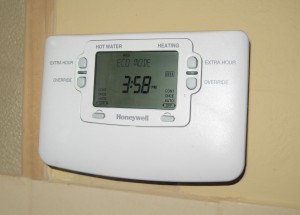 The timer is on the kitchen wall, near the boiler.

Then I only had to screw the new base plate from the Sundial pack to the wall, reconnect the wiring and clip on the new timer, which is secured using two screws recessed into the bottom edge. Although the markings on the wire terminals in the old plate didn’t match the new wiring convention, the Honeywell installation instructions included a table explaining which wire went where.

Powering up
After switching the heating system power back on and powering the thermostat (by removing a tab from its battery compartment) the thermostat and timer worked together perfectly, with no hassle.  Honeywell has thought to build in a wireless strength indicator to help you choose the best position for the thermostat, but we didn’t need it.  The signal strength was good wherever the room thermostat was positioned in our lounge/dining room.

And that’s it!  We’ve now had a complete heating season (autumn to spring) using the new controls. I’ll report on our experience in my next post.