My bent fingers – and the surgical solution

We take our hands and fingers for granted. We use them hundreds of times a day, to open doors, carry things and use tools and gadgets. I’m using them to type these words on a keyboard. Some activities require complex finger movements, such as those I make when playing the guitar.

It came as a surprise when I noticed some of my fingers were bending towards my palm and couldn’t be straightened.

My left hand before surgery: the thickened tissue is visible in the finger and the palm. The little finger is bent inwards.

Then a “Street Doctors” feature on “The One Show” showed someone with the same problem and I was able to put a name to the condition: Dupuytren’s contracture.

Dupuytren’s contracture is named after a French surgeon, Baron Guillaume Dupuytren, who described and researched the condition in 1834. It causes one or more of the fingers, on one or both hands, to bend into the palm of the hand.

The cause
In simple terms, Dupuytren’s contracture is a progressive thickening of tissue under the skin, in the palm of the hand and the fingers.  As the tissue contracts, the finger can’t be extended and which eventually becomes permanently bent. This happens slowly, over a period of many months or years. 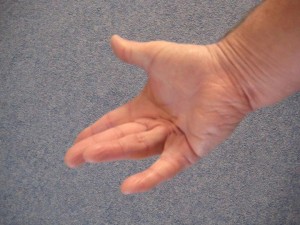 My right hand before surgery: in this case nodules formed in the palm at the base of the finger which progressed to become a cord from the palm into the finger.

It’s not unusual
Dupuytren’s contracture is fairly common. It tends to affect more men than women, and usually occurs in the over 40s. It’s most commonly found in white Europeans and is believed to run in families. Notable sufferers include politicians Margaret Thatcher, Ronald Reagan and Bob Dole, actors Bill Nighy and David McCallum, and cricketers Jonathan Agnew, David Gower and Graham Gooch.

Bill Nighy’s contractures are clear during his frequent appearances on TV and film in recent years. My surgeon explained that Nighy had allowed the condition to proceed too far for surgery to be possible,

Under the knife
Surgery can release the contracted finger. The affected tissue can be cut to relieve the tension in the finger, or the tissue can be removed completely. Around 12,000 of these operations are performed in the UK each year. But there’s a significant chance of it recurring.

I’ve had surgery three times to correct the condition by removal of thickened tissue: firstly on my left hand to release the little finger, secondly on the same hand (about three years later) to re-release the same finger and also to remove the thickened tissue developing in the middle finger and palm, and thirdly to release the ring finger of my right hand by removing tissue within the finger and palm. In each case, surgery was under general anaesthetic and followed by a programme of physiotherapy to develop and maintain movement and muscle strength while aiding healing.

More information
Many web sites describe the condition and its treatment so, for more detailed information, type “Dupuytren’s contracture” into a search engine.

2 Responses to My bent fingers – and the surgical solution