Guildford Museum tells the town’s story from its Saxon origins to its development as an industrial and commercial centre. It’s wonderful that the museum is housed in one of Guildford’s many historic old buildings, but unfortunate for those with impaired mobility. It has stepped access to the entrance and, while the ground floor is accessible to someone confined to a wheelchair, the upper galleries can only be reached by stairs. The museum staff is apologetic and explains that it is unable to modify the building structure due to its listed status.

The museum is in Quarry Street, next to Castle Arch. It is operated by Guildford Borough Council. Entrance is free. 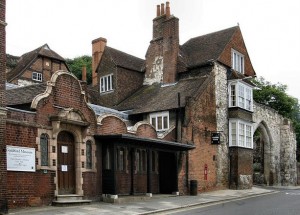 ccess and exhibits
The museum entrance has two steps up from the street. Museum staff can provide a ramp for wheelchairs.

The entrance door enters into the ground floor gallery which has Saxon and Medieval displays as well as temporary exhibitions.

A second gallery on the ground floor is accessed by going two steps down, along a flat passage, then two steps up. Again, the museum staff can provide a wheelchair ramp. The steps have handrails. The doorway is 27 inches wide, just enough to admit a standard wheelchair. This gallery displays objects found in the Guildford area from the Stone Age through to the Roman era.

The other galleries are upstairs and not wheelchair accessible. They can however be accessed by those who can manage a few steps: there are three steps to a small landing, then five up to another landing (handrails are provided). From here you can take six steps into the “History of Guildford” film gallery, or four to reach the upper gallery (but there is no handrail here).

The upper gallery has displays of local history including Victorian childhood, needlework and examples from Guildford’s industrial past. It includes a short history of the Dennis Brothers’ business, which made bicycles which they sold from their Guildford shop. They progressed to making motor vehicles and the business eventually became a leading manufacturer of buses, fire engines and refuse vehicles. Dennis bus chassis are still built in Guildford. 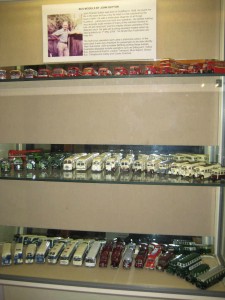 The display of miniature buses made by John Sutton

The most fascinating exhibit in my opinion is the display of very accurate scale models of buses and coaches, made by the late John Sutton, a Guildford resident.  Dozens of the tiny models are displayed as examples of his lifetime’s work. Each has been individually crafted and painted to replicate the original. The attention to detail on these tiny models is breathtaking, down to the lettering on the registration plates and destination boards. 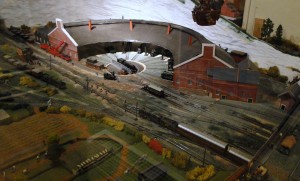 Part of the model railway. Photo: David Jefferies. Reproduced with thanks.

A model railway (reached via two steps down from the upper gallery) shows the extent of Guildford’s railway infrastructure during the steam age, when engine sheds were provided for engines and there were many freight sidings.

Opening hours
Guildford Museum is open Mondays to Saturdays, 11am – 5pm, including Bank Holiday Mondays. There is no charge for access.

Its staff says it is helpful to phone in advance if ramps are required so they can be made ready. The number is 01483 444751.

Getting there
Guildford Borough Council’s web site at www.guildford.gov.uk provides route directions and maps showing locations of car parks. To see the museum’s web page click “Leisure and culture” in the left-hand menu, then “Museums and galleries”.

Visitors who are Blue Badge holders can park at the metered parking almost opposite the museum in Quarry Street. There is a dropped kerb nearby, at the junction with Castle Street.

If you find these pages useful, please leave a comment below.
To report errors or make suggestions please use the contact form by clicking HERE.