South Warnborough to Greywell Tunnel, along the Basingstoke Canal

The Basingstoke Canal has many beautiful stretches, but to my mind the most delightful and interesting is the short westernmost section between South Warnborough and the Greywell Tunnel … my wife and I’s first outing with our two-week old daughter, carried in a sling, on a September day in 1983!

It’s just a mile (1.6 km) along the peaceful canal footpath to Greywell from South Warnborough village, where the canal is accessed beside the road bridge in Hook Road (next to the Esso filling station).

Heading west, after a quarter of a mile you reach South Warnborough Lift Bridge, the only lifting bridge on the canal. 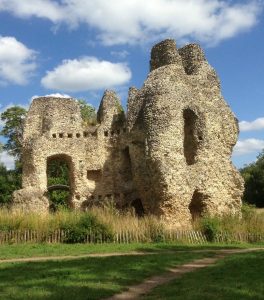 The ruins of Odiham Castle

After another quarter of a mile is the picturesque ruin of King John’s Castle, officially

known as Odiham Castle despite not being in Odiham! King John chose the site because it was midway between his strongholds at Winchester and Windsor. It took seven years to build and was completed in 1214. Then it had a two-storey stone keep (a fortified tower), a square moat and raised banking and palisades.

King John came to the castle in early June 1215, before travelling eastwards to Windsor, then along the Thames to Runnymede to seal the Magna Carta.

Odiham Castle was captured by the French in 1216 after a two-week siege during the First Barons’ War. At some point over the next nine years the keep was rebuilt and an inner moat was added.

What remains today is the ruin of the octagonal keep. It’s free to visit, with good information boards and a grassy area that’s ideal is for a picnic. You can see an excellent drone tour over the castle and surrounding area on YouTube at https://youtu.be/tzVtLxcQcTE

Just past Odiham Castle, the River Whitewater passes beneath the canal through a culvert.

The remainder of the walk has views over fields and towards woodland. The canal is crystal clear, being fed solely by chalk springs. 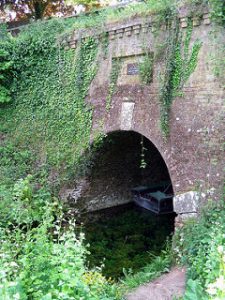 Greywell Tunnel is soon reached. It was closed in 1932 due to a roof fall and is notable today for having more roosting bats than any other site in Britain. The tunnel blockage, combined with several springs in the tunnel, creates an ideal micro-climate for the creatures.

This short canal walk can be extended to include other local footpaths (but not suitable for “walks with wheels”). The Odiham Society has a 4.5 mile circular walk titled “Grewell and Odiham Castle”: see odiham-society.org. For other ideas search on iFootpath.com.