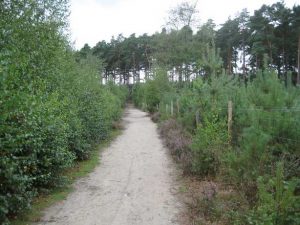 Isn’t it wonderful there are lots of places in Surrey where wildlife habitats are being preserved! And wonderful too there are “wild” places like Farnham Heath Nature Reserve where we’re welcome to roam and see nature.

We’re lucky we still have areas of heathland in Surrey, but the county has lost almost 90% of it over the past couple of centuries. Heathland is increasingly rare, and so is the wildlife that relies upon it.

The Royal Society for the Protection of Birds (RSPB) is responsible for Farnham Heath, a part of the Surrey Hills Area of Outstanding Natural Beauty. Its decision some ten years ago to remove 100 hectares (250 acres) of woodland was controversial, when climate change was on everyone’s minds and people were minded to protect trees and to plant more of them.

But the RSPB argued that the species planted there– Scots pine, Corsican pine and Japanese larch – are not native to southern England. It stressed that the birds living in such conifer forests are common and can survive elsewhere.

Once a gloomy conifer plantation, the Farnham Heath Nature Reserve has been transformed into open rugged heathland dominated by heather and scrubby plants. Wildlife is abundant, including roe deer, crossbills, nightjars, woodcocks and tree pipits. 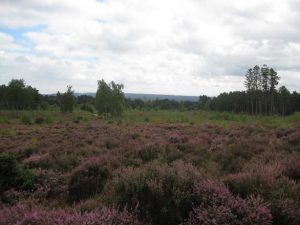 View towards the Surrey Hills

Heathland is vital to conserve some bird species, especially the Dartford warbler, nightjar and woodlark, as well as rare insects, plants and reptiles including the elusive adder, Britain’s only venomous snake.

The RSPB now has breeding Dartford warblers, nightjars, woodlarks, tree pipits, silver studded blue and grayling butterﬂies on the reserve. It has also reintroduced some species such as the sand lizard and field cricket. Flocks of fieldfare and crossbills are regularly seen and heard around the reserve. Siskin are also a regular winter visitor. About 150 species of fungi have been observed.

A guide to the reserve can be downloaded here: https://tinyurl.com/ycp6gvsb. There are three way-marked trails, taking 30, 45 and 90 minutes. The shortest is accessible to pushchairs and wheelchairs, but the gradients and sandy tracks elsewhere make “walking with wheels” very difficult – I know from experience!

Responsible dog owners are welcome to walk their pets, but dogs must be kept on leads in specified areas from February to September to avoid disturbing ground-nesting birds.

The entrance to the reserve is next to the Rural Life Centre in Reeds Road, Tilford (post code for satnavs: GU10 2DL). There is limited parking on the roadside, but visitors can park in the Rural Life Centre’s car park and use its café and toilet facilities. Entry is free, but the RSPB welcomes donations to help maintain and manage the reserve.