An excellent place for a Summer picnic! 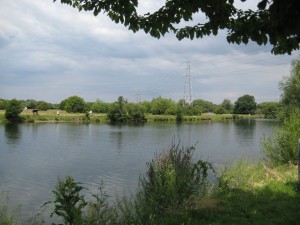 We’ve spend many leisurely sunny afternoons on the grassy bank of the River Thames at Chertsey Meads with a picnic lunch, newspapers, books and binoculars. The steady stream of passing leisure boats is another attraction, especially if you enjoy people watching!

Chertsey Meads is an open space of about 71 hectares (175 acres), between the River Thames and River Bourne.

Its many paths are very popular with dog walkers, horse riders and nature lovers. Most can be used by wheelchair users who have an assistant.

Each of its two car parks (with designated disabled spaces) has a hard surface pathway suitable for wheelchair users and buggies leading to its closest riverside picnic area. The first car park (next to the marina) has a children’s play park; the riverside area here is often very busy with children.  We prefer the more peaceful picnic area, reached by driving straight ahead along Mead Lane, then turning left after about 300m. The car park is on the left after a further 250m. The Streetmap link above points to this car park

Over 400 species of plants have been recorded on Chertsey Meads.

The Meads are also home to a diverse range of birds: 108 species have been recorded over a number of years. These included both farmland birds (such as the Bullfinch, Lesser Whitethroat and Skylark) and species favouring reed beds (such as the Reed Bunting, Sedge Warbler and Reed Warbler).

As this Google Earth snapshot shows, there are many paths across the meadows. For an easy “walk with wheels”, take the path north- 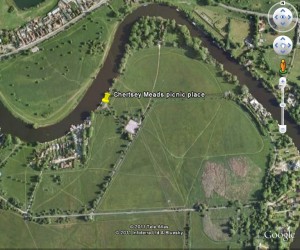 eastwards from the picnic area (marked with a yellow peg). This initially runs parallel to the river, then describes a semicircle. You can choose to return to the car park (in the centre of this image) by turning right after 0.25km along the metalled (private) road, or continue a further 0.3km to a point due east of the picnic area, then take the path on the right towards the car park (a further 0.3km, making a total of 0.85km).
Note: There is a gate where the private road joins the public road at the end of the car park. A wheelchair can bypass the gate but beware of the angled and steep step up to road level, which was hidden by undergrowth when I passed through.