With level paths, beautiful views and diverse flora and fauna, this

nature reserve and adjacent woodland are ideal for wheelchair users, while their proximity to the M25 means disabled people can get close to nature without travelling deep into the countryside.

The site has been provided with a small car park, as described on many web sites and shown on Ordnance Survey maps. There’s even a car park symbol on a signpost  opposite its entrance on Stanwell Road. But access is blocked by a robust metal barrier. We were aware of it only after making the right turn off the road, where directed by the sign!

The barrier prevents access to the site by wheelchair users as well as cars: I was able to get my wheelchair through only after partly folding it. Had I been confined to the chair or had been using a mobility scooter there’d have been no possibility of entry. I pointed out these difficulties to the Royal Borough of Windsor and Maidenhead (in August 2011). Its Outdoor Facilities Manager  apologised and explained the car park had been closed after “significant fly tipping and traveller occupation”.  He will review access to the site to see how it can be improved for those with disabilities. (Note: I haven’t revisited the site since then.)

We weren’t deterred from entering the Reserve, having made a special journey to visit it! We parked on the road verge near the barrier. And once inside, we were delighted with all we saw. 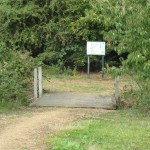 river, adjacent to the village of Horton, Berkshire. The site covers 4.6 hectares and rapidly developed into a haven for wildlife after being opened in 1996. The Reserve was created from wasteland and a series of derelict sewage sludge lagoons. It’s to the developers’ great credits that there’s no evidence of the site’s former ugliness.  The Reserve has four lagoons containing reeds and aquatic plants, while the rest of the area has been extensively planted with trees, shrubs and wildflower meadows. The Reserve is now an important wetland habitat and was designated as a Local Nature Reserve in 1999.

The paths are of compacted small gravel with no gradients, so are ideal for wheelchairs and those with walking difficulties. Seats and information boards are spread across the site. Clearly the Reserve was created with wheelchair users in mind, so the closure of its car park is unfortunate.

The paths wind through the Reserve while maintaining the same level, opening new vistas at each turn. The left-hand path runs 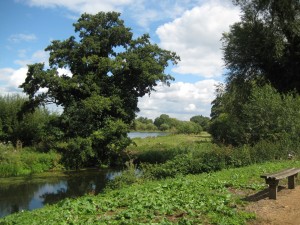 alongside the river and leads to a magnificent view over an adjacent lake where we watched, entranced, as wildfowl including a heron fished for food. (The two large lakes adjacent to the Reserve aren’t shown on maps, so must have been created fairly recently following gravel extraction.)

One very obvious characteristic of the Reserve has nothing to do with wildlife or the site’s attractiveness. Being situated just two miles from the western end of Heathrow Airport’s runways, there’s 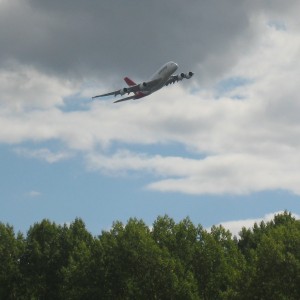 An Airbus A380 "super jumbo" from Heathrow approaches the Reserve

a steady procession of jet aircraft overhead. Some may consider the noise intrusive, but we found the aircraft added extra interest. And we were amazed that, during pauses between planes, the site was tranquil and peaceful, with only birdsong and the buzzing of insects to break the silence.

The (closed) car park is also adjacent to Poyle Poplars. This woodland covering six hectares gets its name from the hybrid poplar trees planted here for matchwood in the 1970s. The woodland was badly damaged by the storm of 1987, after which native trees and shrubs including black poplar were planted to attract wildlife. Its main path is level and suitable for wheelchair users (but the chair will need to be pushed for much of the way due to the uneven ground and tree roots). It curves back on itself to return you to the start point along a parallel path, providing a pleasant circular journey. There’s a narrow footbridge with a single step up and down, but it can be avoided by taking a short-cut (click the link below to see a map).

We took a picnic and had a wonderful day in the Nature Reserve and Poyle Poplars, despite the access difficulties presented by the barrier across the car park entrance, which makes it appear so unwelcoming and difficult to access by wheelchair users.